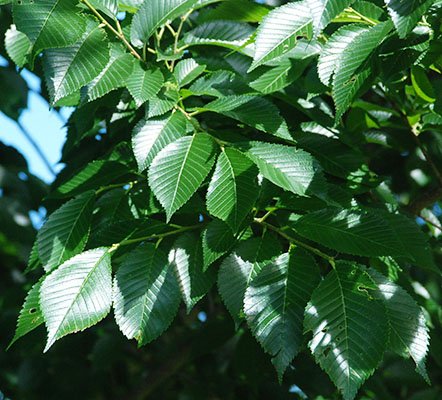 Triumph Elm has very good resistance to Dutch Elm Disease. It is adaptable to most soils. Dark green summer foliage gives way to yellow fall color. Grows up to 50′ and width of 40’. It has a vase shaped form. Cheyenne Urban Forestry has planted this tree in some of the city parks and have had no problems with them. The are fast growers that can take a beating.

This tree was introduced by The Morton Arboretum. It is also a part of The National Elm Trial. The National Elm Trial is an American volunteer effort to evaluate a range of newly developed elm cultivars as replacements for elms destroyed by Dutch elm disease (DED). It is coordinated by Colorado State University.

The Executive Summary for The National Elm Trial is as follows: “The National Elm Trial includes 15-18 DED-resistant commercially available elm cultivars planted at 17 evaluation sites in 16 states. These elm cultivars were evaluated over a wide range of growing conditions and hardiness zones. This nation-wide study has one coordinating and reporting system that is based at Colorado State University. This web site reports the performance data for trees at all sites. Even though many DED-resistant elm cultivars exist and are available in the nursery trade, much of the public is hesitant to purchase and plant any elm tree. While the DED-resistant elm cultivars could enhance the diversity as well as the beauty of urban forests, these cultivars do vary in their response to other biotic and abiotic stresses. Thus, currently available elm cultivars were planted in large replicated trials in a wide range of environmental conditions across the United States so that their growth and performance could be evaluated.”

The University of Minnesota gave this description “The Triumph™ Elm, Ulmus ‘Morton Glossy’, is a selection that resulted from a controlled cross between Vanguard™ Elm and Accolade Elm, conducted by Dr. George Ware at the Morton Arboretum. Triumph literally grow like weeds, and they recover from crown damage exceptionally well. Despite the degraded reputation elm trees endured for so many years, recent research and breeding programs have given them new life. The challenge now is to know which elm cultivar to grow, or plant, given the many new varieties that are slowly reaching the market. We actually began growing Triumph Elm by accident, having received the tree in a shipment of the highly favored Accolade Elm, Ulmus japonica x wilsoniana ‘Morton’, that we had ordered.”